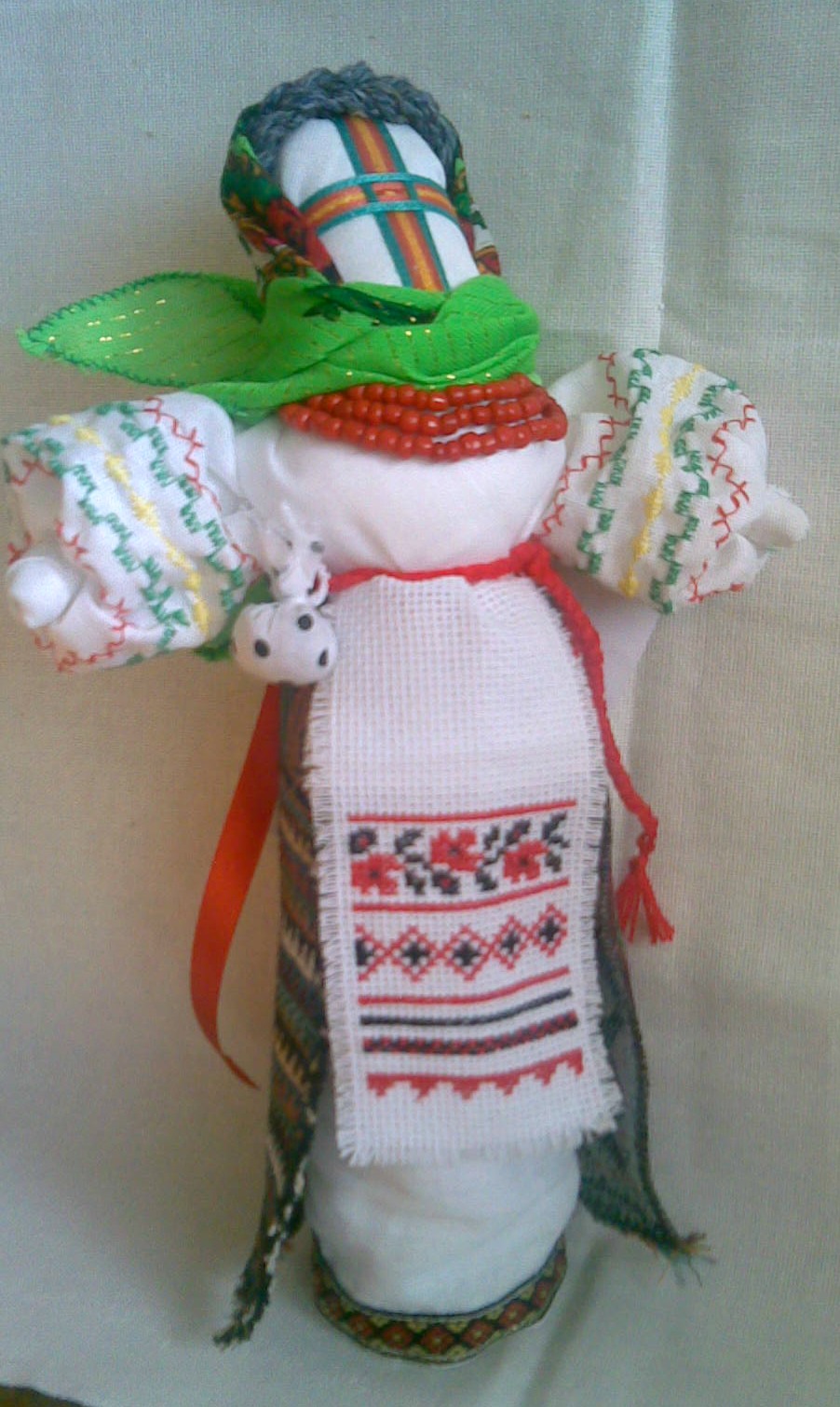 At all times people addressed to gods with prayer for a good harvest, healing from illnesses, protection. Dolls acted in a role of the reliable assistant and amulet of the person. Earlier in each house was many rag dolls, - they served as amulets of dwellings, children, a dream, an economy, and they had a ceremonial appointment and at the same time were the most widespread children toys.

Traditional Motanka made only from slices of a fabric, threads and natural materials. The face of doll wasn't represented, or instead of it was a sun symbol — the Cross, that is also the symbol of unity of the Earth and the Heaven, male and female origins. Such doll was a powerful amulet!

Now in age of the newest technologies we try to revive the traditions of our ancestors, and on particles we collect the ways which have remained yet in the people of manufacturing of preserving dolls.

Each doll is as the whole world - the world of language, of a suit, of a song, or crafts. The national doll is much better than a modern plastic toy because it is pleasant to take it in hands. It is made of natural materials, and bears behind itself a layer of national culture, traditions, and certainly love of the Master creating these dolls.

Doll of Motanka– an Ukrainian amulet, its basic purpose is to protect the owner and his/her house from troubles, to bring success in affairs, to promote prosperity. The doll is made of natural materials – flax, a clap. The head is made from rolls of a linen fabric. The sacral cross instead of  face symbolizes unity of the Heaven and the Earth, male (a vertical line) and female (horizontal) origins. The Dolls are dressed in a suit, characteristic for Ukraine in XVIII-XIX centuries.

Zernushka (Grain Doll) - a Slavic national doll, its main destination is a creation in the house of heat, a cosiness and material welfare. In its little body that is made of cloth people filled grain after a harvest season, and then a big-bellied doll established on barn chests that the future crop becomes even richer and in the house the supplies never came to an end.

Muzhik-rich man - traditional Slavic amulet doll. It was made of grain of a new crop and was stored in the house on a dining table (near to Zernovushka). It symbolized a prosperity in the house. Promotes prosperity  for families  and in business too. It brings a male energy. It is possible to store in office for profit multiplication.

Nerazluchniki (Inseparable Couple) – a wedding Slavic doll. It is a traditional family amulet. Female and male origins incorporates in indissoluble Whole – the dolls have one common hand that they went on life hand in hand, they were together both in pleasure, and in a trouble. It is considered as a wedding ceremonial doll. Traditionally this doll participated in wedding ceremony, as a symbol of the new established family.

Travnitsa (Grass Doll) –  Slavic amulet doll, its basic purpose is reservation of the good relations in house, health, well-being. In its magnificent skirt the sack with curative grasses - mint, origan, a balm is placed. Aroma from such doll is pleasant and useful to health since grasses contain volatile production.

Doll of Stolbushka with children – a symbol of riches of a family, fertility. It represents a composition: –  children are adhered like belt to body of Mother. It was considered that a considerable quantity of children makes the prosperity of families so, in house, always there will be a prosperity. On national representations, such doll helps to put into practice desire to have the healthy child, and also influences relations between children and parents. Often such composition people presented to a newly-married couple as a gift.

Stolbushka the Beauty - a national doll the assistant. A plait is a symbol of the maiden beauty and female force. The wreath on a head, says that the girl is not married. The given doll was made by girls who wanted to marry faster and the doll helped them with it.

Lucky Doll  - one of ancient Slavic amulets. It was given in various occasions with happiness and good wishes. Well underlined legs bear a stability symbol in life, and the long and strong plait is a vital force, the energy supporting the person in its way.

Spiridon-solstice – a Slavic amulet doll. Spiridon's Holiday are the days of winter and summer solstice, a holiday of the arising or leaving sun. This doll is for man and is given to the man as gift. It helped to the master of house to "steer the wheel" in business. As it is given with a wish of turn of life to the best. Bears in itself the male energy of stability  and reliability.

Doll of Motanka the Guardian angel – amulet doll made in tradition of the Ukrainian national doll. A basic purpose is to preserve the owner and its house against influence of negative energies, to promote its prosperity, to help at choice of decisions. The doll is made of natural fabrics and natural materials. The head is made from скатки a linen fabric. The sacral cross instead of the person symbolizes unity of the sky and the earth, man's and female energies.

Doll of Veduchka - an ancient Slavic pair doll. Represents mother conducting the kid. At hand dolls make a single whole that says that the child is still closely connected with mother and it conducts it on life, strong holding for handles. The doll promotes an establishment of strong mutual relations of mother and the child, helps with education, preserves mother and the child.

Nested doll – a symbol of female beauty, love, motherhood. Also  it is considered as a universe symbol. There is a tradition to put the wish which has been written down on a paper in a nested doll and it can execute this wish. Our nested doll is made of a fabric, painted manually and it has kept ability to grant your desires.

Doll of Forty – an embodiment of female energy, curiosity, a coquetry, cleanliness, thriftiness. But all should be moderately. It is considered also as bird of mail and a good news (forty on a tail has brought), a symbol of changes.

The bird Pleasure bears in itself the echoes of ancient Slavic custom – The calling of spring. The doll is decorated by birds – it was considered, if the bird sits down on the woman, it will bring her the happiness. A bird Pleasure is very beautiful, cheerful, positive.

Bereginushka – a Slavic preserving amulet. This small doll - is made on similarity of Beregini – the most important doll in the house and keeps its functions. The convenient size of the given doll allows to carry it always with itself or on itself. Hands lifted upwards is a request for protection at God.

Vesnianka (Spring Doll)- It is a cheerful, fervent doll which was done by young girls on arrival of spring. Traditionally it very bright, with hair of unusual color. Such dolls of the girl gave each other. The doll is an amulet of youth and beauty. Having presented such doll to the man, you wish him to remain long young and cheerful, to the woman - always to be charming and attractive.

Podoroznitsa (she fellow traveler) – Slavic amulet. The mistress of the house gave such amulet to the one who left from the house on any affairs - to the husband, children. And the doll protected them in a way against dangers, and the symbolical sack with grain in her hands gave satiety and forces in a way, providing safe returning home.